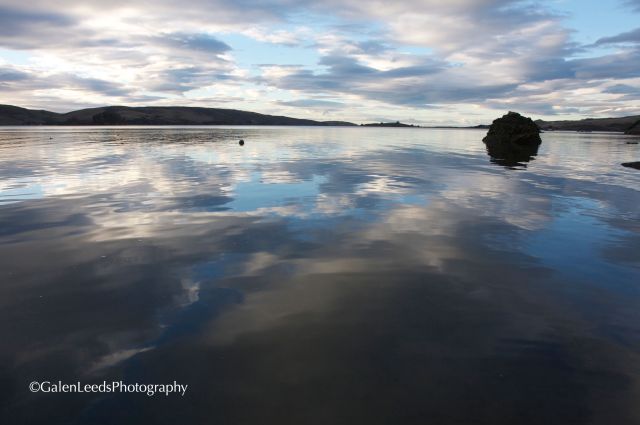 This is the first in a new series I am starting on the blog. Every few days I will post a “Photo of the Day” and explain how I captured that particular image, what I was thinking as I tried for the capture. Sometime it will be images that I believe were success, sometimes they will be failures (failures are sometimes the best educators.)

This image was taken a little before sunset one evening on Tomales Bay. I was on the east side of the bay, facing west towards the setting sun. The source of light was coming from across the bay, and I knew this would nicely silhouette any rocks that were visible. The water was calm and fairly glassy. A good time to incorporate reflections into the image. It was also a very nice sky as there were clouds. A plain blue sky without clouds is boring, as is a featureless gray expanse. The best is a mix of shapes and colors (which is why I love thunderstorms). Also the simplicity in the colors is nice. There are few colors to distract from the scene.

I was using a fairly wide angle of lens (zoomed all the way out to capture as much of the scenery as possible.) When I am zoomed out I like to have strong foreground elements, objects or images close to the camera. This will help to give scale to an image, a sense of the immensity of the landscape. I got down low to the water. If I was high above the water I knew I would lose much of the foreground detail, that there would be little to scale against.

I looked around for rocks in the water to help break up the endless reflection of the sky, something that would contrast the blue and the clouds. Reflections are beautiful, but they it can be easier to appreciate them if there is something solid or contrasting in them to catch the eye.

Next I followed the rule of thirds (this is something that is likely over discussed, but valuable because it can often help to initially set up the composition). I placed the horizon in the upper third of image (very rarely will I place a horizon dead in the center of an image, because it won’t flow as well.) I left the reflection in the lower two-thirds of the image, because I thought that the exceptional clarity mixed with the small swells made it a stronger image than the sky. I offset the rocks to one side, again avoiding key images in the center of the picture.

I set my camera to under expose slightly. Since I was looking towards the light source it didn’t especially matter if it was blocked by the hills and clouds. I wanted to maintain the color saturation I was seeing with my eyes, and to possibly even add to it a little. Also, water reflects a lot of light and I was trying to compensate slightly for that.

I did a test shot or two, making sure my exposure was around where I wanted it, did my final composition, and took the shot. I also played around with a few other compositions, but this was my favorite (at least today).

I hope you enjoyed this additional format to the blog

Nature and wildlife photographer, exploring the world on his feet and from his kayak. Among other genres, he is one of the leading kayak photographers in Northern California. To learn more about him, visit him on his website- www.galenleeds.net
View all posts by Galen Leeds Photography →
This entry was posted in Anatomy of a photo, How To, landscapes, nature photography, photography and tagged cloudy sky, how to, landscape, photography, reflections, scenic, Tomales Bay, water. Bookmark the permalink.