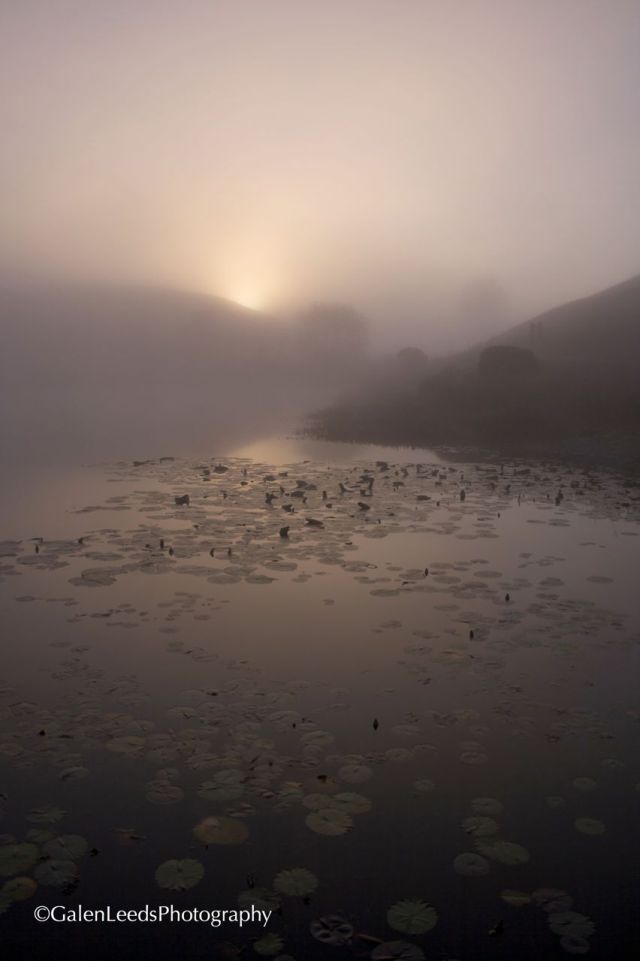 Early morning picture of lily pads on a pond

I made this image in my early days of digital photography, before I knew all the ins and outs of modern cameras. It didn’t really matter though, as many things such as exposure, compensating for bright light, focus, composition- all of these can transcend whether the camera is digital or film, SLR or otherwise.

Early mornings are a fantastic time for light. Warmer richer tones can be found in the morning and evening, often times an hour either side of the sun rising or setting being the best. The next part is to find a place to make use of that light. The final part is to compose and expose.

Composition and exposure can be a matter of personal expression to some degree, but there are some tips that can often be helpful. Try not to put the focal point at the exact center of the image. Have points of interest (but not too many points) off center so that the eye will move around the photograph more.

For exposures, under exposing just a little can often give deeper, richer colors when you are looking towards the sun or the source of light. Also, if you have the sun in the photograph, it will often help to under expose even more, or else yo will have a giant white blob expanding out from the sun (an area where the picture is way over exposed).

This picture I underexposed by a third of a stop. The sun wasn’t as overly bright as it could have been, because it was dimmed by the fog. I used a wide angle lens- 18mm, to help elongate the image, with the lily pads being much larger closer to me, and the pond stretching off into the mists.

Nature and wildlife photographer, exploring the world on his feet and from his kayak. Among other genres, he is one of the leading kayak photographers in Northern California. To learn more about him, visit him on his website- www.galenleeds.net
View all posts by Galen Leeds Photography →
This entry was posted in Anatomy of a photo, landscapes, nature photography, photography and tagged light, lily pad, lily pads, mist, nature, outdoors, photography, pond, wide angle lens. Bookmark the permalink.