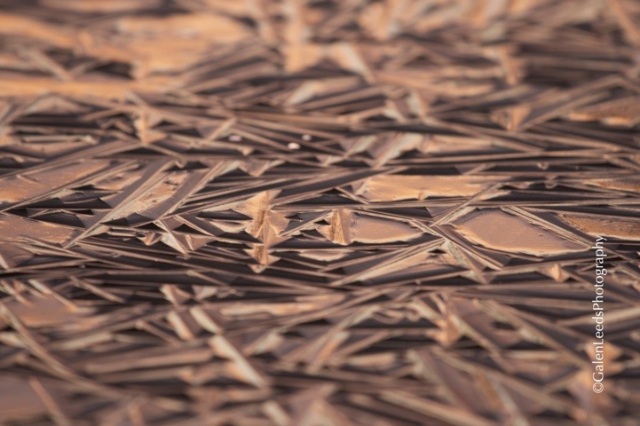 While out hiking one frozen, frosted morning I decided to see if the seasonal stream that runs near my house had frozen. It had, but in a way that I had never imagined.

During the night, as the barely moving stream sat in the deepening cold, it began to freeze, and it froze into raised crystalline, geometric shapes with angled sides. I don’t know the how or the why of it, but I captured it with my camera all the same.

The lighting is natural, as is the color. The sun was beginning to rise, and while it was not hitting the ice directly, it colored the sky, which was reflected by the ice.

I used a 200mm lens, and crouched down nearby to get the closeness and angle that you see.

The second picture was taken at the same time, but at 116mm. Aperture was wide open for both at f/4.0. Shutter speed was rather slow 1/30. I used a tripod in this case to eliminate shake.

If you’d like to see another example of math in nature, check out these photographs of natural cauliflower fractals

Nature and wildlife photographer, exploring the world on his feet and from his kayak. Among other genres, he is one of the leading kayak photographers in Northern California. To learn more about him, visit him on his website- www.galenleeds.net
View all posts by Galen Leeds Photography →
This entry was posted in Anatomy of a photo, How To, nature photography, SLR, weather and tagged frost, Ice, nature, phenomenon, photography. Bookmark the permalink.

4 Responses to Anatomy of a photo #59: Geometric ice anamoly