Birds in Flight: Part I

I’ve recently had questions about photographing birds in flight. Today I will begin to address some of the techniques and tips for flight pictures, although to some degree it will be somewhat general, as there are so many different species of bird, each found in a different size, and each with its own way of moving (fast, slow, ponderous, etc.) that there is no single “best” method. Photographing a Western Bluebird in flight varies greatly from capturing a Brown Pelican, which is different from an Osprey with a fish… And even an osprey with a fish can have different possibilities, depending on the angle and the composition desired. 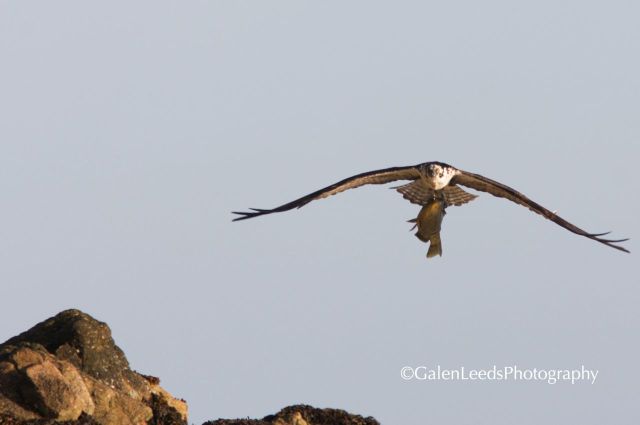 An Osprey with a fish, shot head on

There are three preferred angles for shooting birds in flight that will generally net you the best results. Head on, side on, or from directly underneath. Once the bird has passed, even a little bit, and the shot is more from the tail side, the photo has already lost some of its power. This is a generalization, however, and there will be exceptions.

Male Northern Harrier (Marsh Hawk) shot from the side

When photographing birds from underneath, especially if they are at a slight distance, your camera often will not set to the proper exposure. All of that sky in the image can confuse it, and depending on how bright or dark the sky is, you will have to adjust your exposure. I find that to capture detail in the bird, I often have to over expose the image by about 2/3 stop. Sometimes this will leave the sky a little washed out. 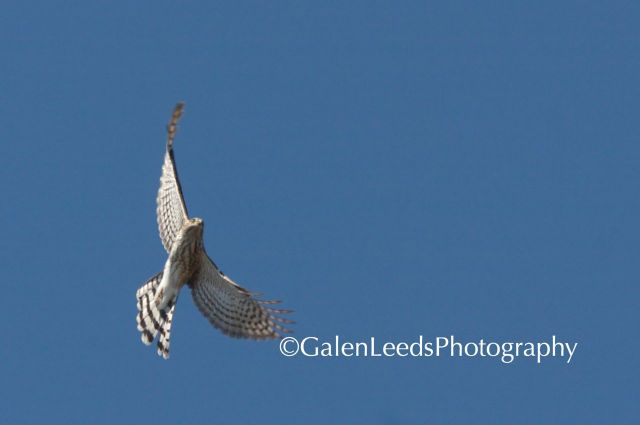 This can quickly change however if that bird turns, and its underside is suddenly hit and highlighted by the sun. In this case, the sky can be more properly exposed. I often try to have the underside lit by the sun when possible. The trick to doing this is to watch their flight and behavior, so that you can guess when those turns will take place. Also time of day is very important. Early and late in the day, when the sun is closer to the horizon, it is much easier for the sun to light the under side of a bird, since it is shining from the side instead of from over head.

It is different to shoot many birds versus single birds

As you may have noticed yourself, it is a very different thing to shoot birds singly, or as a flock. Composition is immediately affected, and you will have to plan accordingly.

Size does matter. If you are photographing smaller birds, it is necessary to be closer, as they are smaller and will take up less space in the image the farther they are from you. I would not shoot a Bluebird from the same distance as I would a Great Blue Heron. A Great Blue Heron can fill most of the frame from thirty feet away and the right lens. Use the same lens at the same distance on a bluebird, and it will be a speck in the corner of the image. The larger the bird, the farther you can be. Also smaller birds generally will move more quickly and require a faster shutter speed than a larger bird, which can be more ponderous.

White-tailed Kite on the hunt, head on

Flight is action. Try to capture your images in such a way, that even when frozen in time, that actions is somehow conveyed. You can do this through shutter speed- shooting slow enough that there will be a slight blur at the wingtips, or perhaps fast enough that you freeze some of the water droplets as they come off of a bird that is leaving the water. It will depend on the situation. 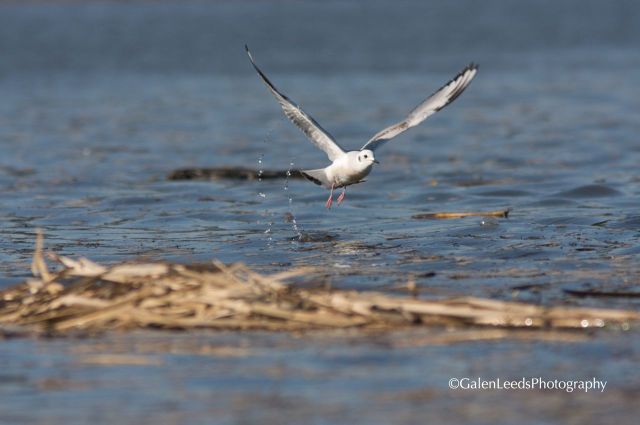 Notice the water droplets trailing off of this Bonaparte's Gull

Nature and wildlife photographer, exploring the world on his feet and from his kayak. Among other genres, he is one of the leading kayak photographers in Northern California. To learn more about him, visit him on his website- www.galenleeds.net
View all posts by Galen Leeds Photography →
This entry was posted in birds, How To, nature photography, photography and tagged birds in flight, nature, photography, wildlife. Bookmark the permalink.

14 Responses to Birds in Flight: Part I