Anatomy of a photo # 14: Three Willets in pickleweed 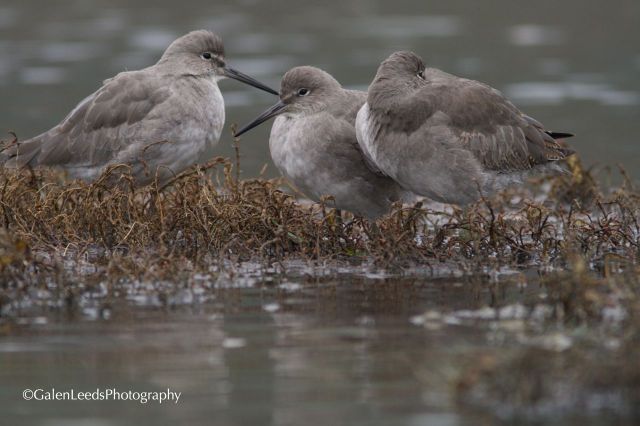 Even though these are birds, it is still a portrait

As I look through my photographs of animal images, I notice more and more that there are two main lighting conditions that most of my favorite portraits were taken in- early/late low angle sun, or else while the subject was in a large shadow. The low angle sun adds warmth and dramatic lighting, while shadow (often because of cloud or fog, but sometimes from time of day and location) adds a moody, even lighting and provides for great detail without losing much to the contrast between highlights and deep shadows.

I made this image while kayaking Drake’s Estero on a foggy day. The even lighting gives the birds great detail. I used a fairly long lens for this portrait- 300mm plus a 1.4x magnifier. Since I was on a kayak, I had to hand hold this shot, which means I was shooting at the highest shutter speed I could without losing image quality. My ISO was 400 (the highest the camera I was using could do without noticeable noise) and my aperture was wide open at f 5.6. This allowed me a shutter speed of 400. With the lenses I was using, (they were image stabilizing) I might have tried dropping down to 200, but I know I would have lost some of the images I took to camera shake.

The shallow depth of field I was using worked very well for isolating the focus to the birds and a little of the pickleweed plant they are standing in. This is something I often like to do with portraits regardless, because it draws the viewers focus very strongly to the subjects. I also placed the heads and eyes in the top section of the picture, rather than along a line cutting through the center of the image when I composed the image. It gives it a more comfortable feel, and helps to fill the entire frame of the picture.

The composition is helped additionally by the low angle I took the picture from. I hunched down extra low in the kayak to be a little closer to eye level with the birds. When ever possible I like to be at or near the eye level of my subjects, be they birds, wild animals, livestock, or even little kids. It is hard to make a portrait when you are looking down at the top of somethings head instead of engaging the eyes.

Nature and wildlife photographer, exploring the world on his feet and from his kayak. Among other genres, he is one of the leading kayak photographers in Northern California. To learn more about him, visit him on his website- www.galenleeds.net
View all posts by Galen Leeds Photography →
This entry was posted in Anatomy of a photo, birds, kayak photography, nature photography, photography, shorebirds and tagged bird, kayak, nature, photography, willet. Bookmark the permalink.

3 Responses to Anatomy of a photo # 14: Three Willets in pickleweed