Anatomy of a photo #38: Hawktopus 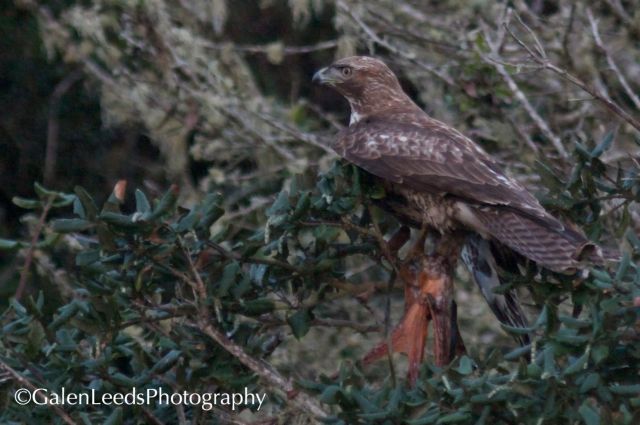 It was the middle of winter, less than two weeks past solstice, and there were rumors of whales in Tomales Bay. It was hard for me to put my kayak in the water before 4:30pm that week, but one day I decided to see how far I could make it before I lost all light- Could I paddle fast enough and far enough to make it where the whale had been seen while it was still bright enough to photograph from my kayak? Likely not, but it was worth a try.

I set out paddling hard. I knew it was a pace that would be difficult to maintain for long, but I was feeling driven. I cut across the bay on a different line than I normally would have, driving farther to the north, where I had come across whales before, and where I knew the water was deeper. I kept up the high speed rhythm I had settled into, instead of easing up as my muscles began to burn. The sun was already behind the hills, and the light was fading quickly. I didn’t know why I was carrying on, as my light was essentially gone already.

I had just reached the far shore and was adjusting my course more to the north when a juvenile Red-tailed Hawk flew into view, trailing something in its talons. I trained my ever present binoculars on it and felt my jaw drop (well, almost felt it drop). The hawk was carrying an octopus, something I could have imagined from an Osprey, but never a Red-tail.

It landed near me in a low tree near the shore. I immediately began retrieving my camera from my dry bag (it was fairly well stowed away, as I thought it was so dark I wouldn’t be using it). I cranked the ISO up higher than I ever would have in normal circumstances- 1600. I didn’t care about noise now, I just new I needed to capture some images of this phenomenon. I opened up the aperture as wide as it would go, saying to heck with depth of field, and then set my shutter speed- 1/200th of a second.

The image was still a little dark, but I didn’t trust myself to be able to hand hold the camera steady enough to capture a crisp shot at a lower shutter speed, especially as I was shooting from my kayak, and a crisp image was imperative. I needed these photographs, I had to capture such an amazing prey in a Red-tails talons.

I discretely paddled a little closer, only a few hidden strokes, and then left my kayak to drift with its momentum very slowly toward the bird in the bush. Click. Click. It took wing. I’m not sure if it is because the Tail realized my proximity, or if it was because of the movement of the octopus (which was very definitely still alive), and it wanted a better perch for eating and killing. I captured several images as it flew off. These are blurred from the slow shutter speed that the low light necessitated, but much better these blurred images than none at all… the blurring even adds a sense of movement to some of the pictures.

The bird flew around a small point with the octopus writhing in its talons. I followed, but it had disappeared.
I have since learned that it was an Octopus rubescens, or common coastal red octopus. They can shift their color depending upon their mood, and red is the color that shows they are angry. This one looks very angry with its deep red color.
It is very rare to see octopus on this bay. I had only seen them for the first time a few days previously. 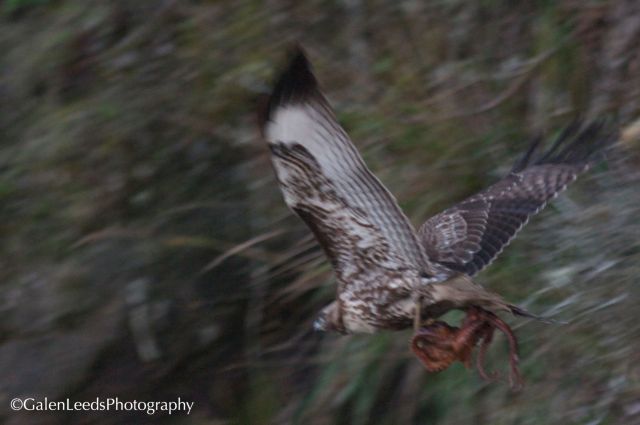 And away it goes

11 Responses to Anatomy of a photo #38: Hawktopus