Anatomy of a photo: How do I photograph an otter eating a fish?

I can only answer this question by explaining how I got high definition video and 20+ megapixel images of a North American River Otter this past weekend.

The first key factor was, well, luck. I was kayaking in an area that’s about 30 square miles of open water. Coming across an otter in that much space is at least partially happenstance. I did however stack the deck in my own favor, to help create that luck.

I began my kayak outing early in the morning, before sunrise. Leaving before it is fully light out, makes it tricky to create many images right off, but it does give you time to make it to either good vantages or wildlife rich areas and set up as good lighting naturally arrives. With wildlife there is an added advantage to an early start. Many animals will be most active early I. The morning, late afternoon, and through the night. Wild critters are usually at their least active during the midday hours (siesta time I suppose). I’ve yet to come across river otters being active in the middle of the day. 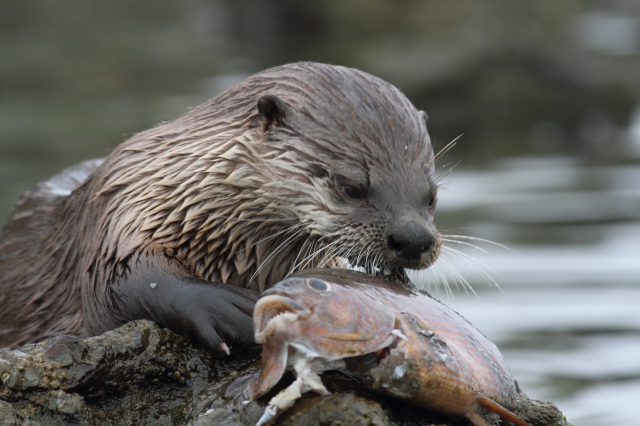 I came across the river otter as it was swimming across the bay. They can be hard to notice when they are swimming, because they are smallish animals and there isn’t much to see of them above the waterline. They are much easier to spot when there is little to know wind, and the surface of the water doesn’t have many waves or ripples. (This again plays into kayaking early in the day, before the wind has a chance to pick up.) I am also familiar with the different profiles that the more common seals present against the water, versus the otters. (It is important to know what the local animals are, and a little something about their looks and behavior.) 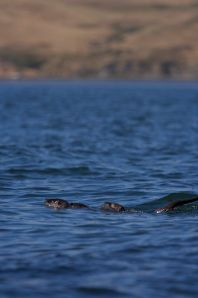 I have lots of images of otters swimming in open water, and while fun to look at, you only need so many swimming shots. So I kept a very discreet distance. I had a good pair of binoculars with me, and stayed 75 to 100 yards away. Otters swim large distances at a time underwater, and I watched it when it dove (the direction it was swimming in) so that I could project the likely area that it would pop to the surface in. I also did most of my paddling while it was underwater. That way it wouldn’t see me flailing along in hot pursuit and feel threatened.

When it finally approached the shore and rocks, I continued to maintain my distance, slowly drifting closer, paddling discreetly with only half my paddle- I had disassembled it just for this reason as I got with in fifty yards. I watched the otter the whole time, judging its reaction to me. If an animal seems to be nervous or overly aware of me I back off. If you scare an animal away, you’ve failed in two respects- not only have you disturbed it from its natural behavior and added stress to its life, but you’ve also lost the subject you were photographing. 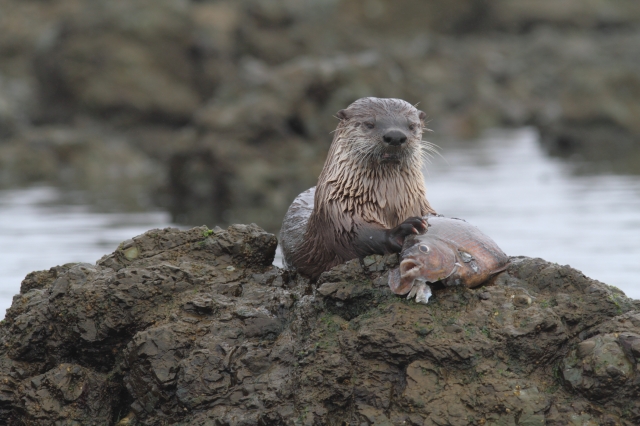 I decided to approach a little more closely

As I drifted slowly closer watching it, I saw the otter climb out onto a rock. I stopped taking stills and began recording high definition video instead. (For both the video and stills I was using the longest lens I had, helping me to get close images without getting overly close to the otter.) It was as I was filming that I noticed that the otter had climbed onto the rock with a rather large fish.

Food can have a funny effect on animals. It can help distract them so that you can approach more carefully, but it can also make them more defensive which means that they will try to run away with the food or attack to chase off those that might steal it. (You can observe these varying attitudes even in dogs. I would never try to take a bone from a strange dog. It might bite.)

The fish that the otter was eating was so large, that I suspected it would not want to swim very far with it, so I approached a little more closely than I might have otherwise, as it seemed very busy with its feeding. I still gave most of my attention to how it was reacting to me. At times I would drift closer than I attended, and so with very slow, smooth motions (no jerky or fast motions,) I would gently back my kayak away, using just the half paddle. I tried very hard not to scare the otter from its meal or to make it feel like it had to defend its meal by approaching too closely. The otter had worked too hard for that fish already.

This picture helps to show part of the story, even without, or especially without the otter being present

Using the rudder, slight breeze, and tidal currents, I was able to drift around the otter until it had finished the entire fish (except the head) photographing it from many angles. After the otter left, I shooed away some gulls that had been waiting for leftovers, and took a few pictures of the remains to continue on with the story. I then filmed the gulls as they descended upon the prize.

In the end it was being prepared and giving the otter its space that set me up for these pictures.

Go out and make some of your own luck,

For more images of otters- The North American River Otter: An essay in Photos #1

2 Responses to Anatomy of a photo: How do I photograph an otter eating a fish?