Anatomy of a photo #7: Oak silhouette 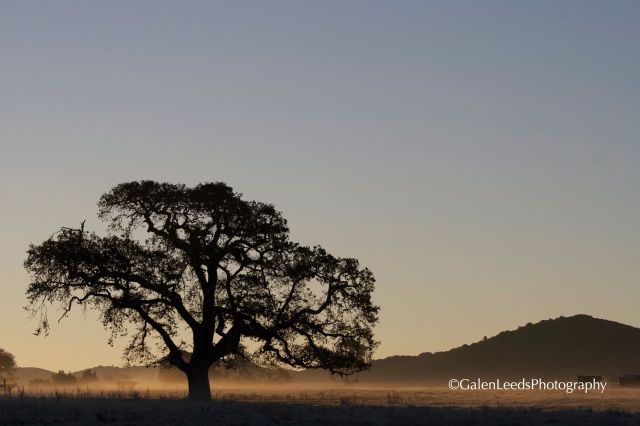 I have different areas that I’ve scouted out over the years, that I know are interesting places for pictures. These are areas that I will visit early, early in the morning, when the light is going through its changes, when it is warm and magic. This silhouette of an oak tree is from one of those places. There is a series of old, twisted oaks in the middle of cow pasture. Each one is separated from the other trees by open spaces, so that it is possible to make portraits of individual, interesting trees. It’s good to have places in your head that you know you would like to shoot, rather than always hoping to chance upon an interesting scene while you are out and about.

For this image, I realized that I could nicely silhouette this oak, thanks to a low lying mist. If the mist hadn’t been there, the trunk of the tree would have been lost in the dark colors of the hills behind. The mist though, was lit up, giving something to contrast the tree against, and one thing that is important to silhouettes is that contrast.

To take this picture, I didn’t use the “classic” landscape lenses, which are generally fairly wide, taking in as much of the scene as possible. The lens used for this picture would be about a 125mm (in terms of the old 35mm film cameras). This allowed a tighter composition, that didn’t try to include too much. It’s sort of zoomed in on the oak. The slightly longer lens also gives a somewhat shallower depth of field, helping to keep the focus on the oak.

I manually set the aperture and time values, as I didn’t trust the camera to choose the exposure I wanted. If you don’t have this option on your camera, you should at least have a function for exposure compensation. The compensation would be towards the negative side, likely as far as your camera would allow you to adjust- usually  -2.0 is the maximum.