The Badger crosses the road

I was driving home to Tomales one day after the Point Reyes Farmer’s Market, when I saw this white stripe moving through the grass on the side of the road. “A skunk!” I thought to myself. I hardly had time to debate with myself, the pros and obvious cons of trying to photograph a skunk (especially one that is out and about during the afternoon hours,) when I realized that it was not a skunk. 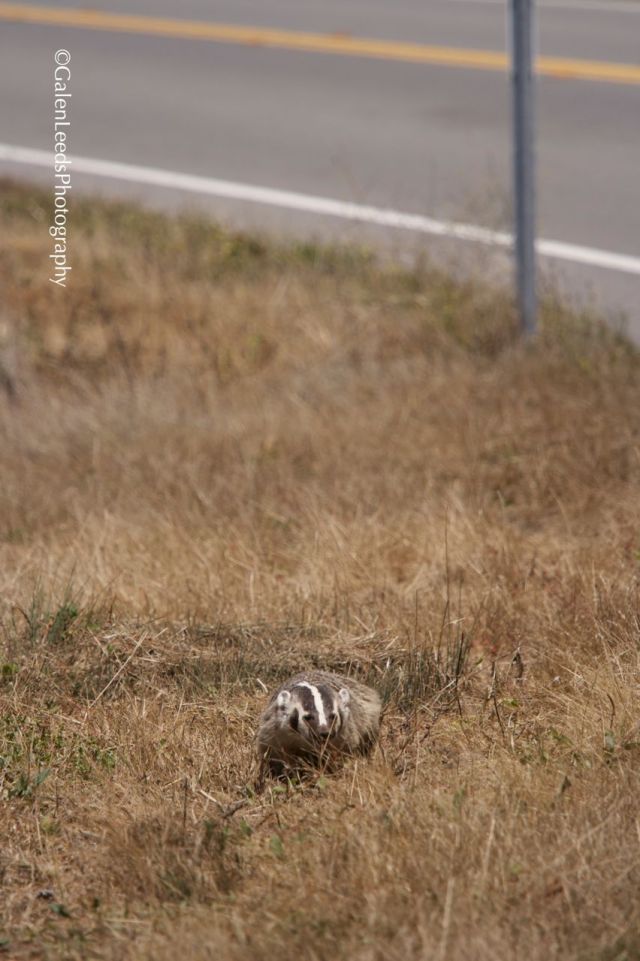 A white stripe walking down the road, but i wasn't a skunk

I used the first dirt pull-off, grabbed my camera, and went for a little jog. This was only the second time I had seen a live badger (I’ve seen several road kills in the area. So, keeping my distance because of rumors of their ferocity, I took pictures of this fine mustelid, until it decided to cross the road. I didn’t get pictures of it crossing, because they are slow crossers and I was obliged to wave down traffic. The badger did not care about the cars. It seemed to think that if they were stupid enough to mess with it, it would give them a lesson. 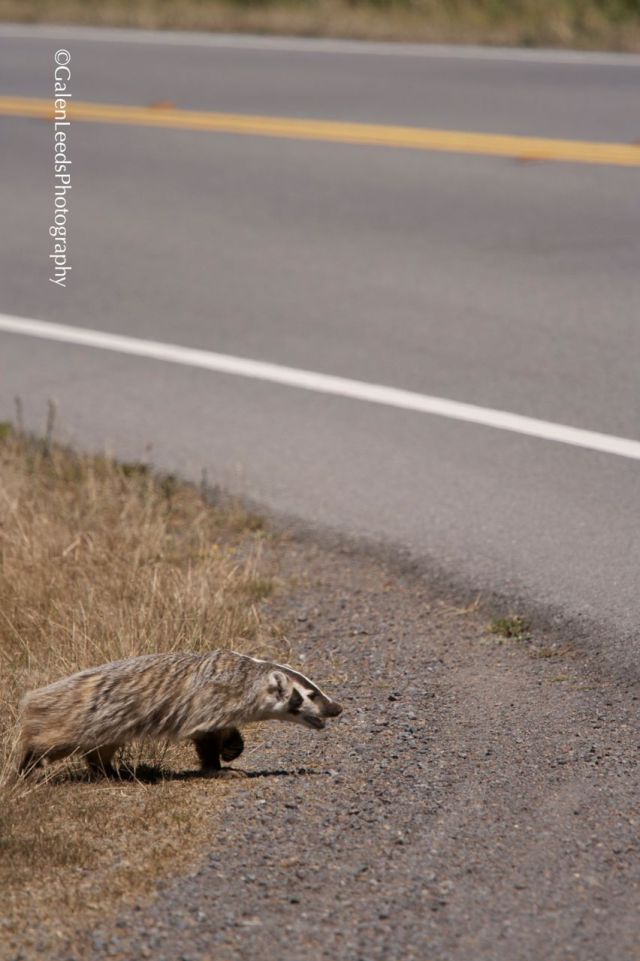 The badger getting ready to cross the road

One man stopped and asked, “Uh is that a hedge hog?” I gently explained it was a badger. He responded with “Wow! Cool… A badger,” and drove away suitably impressed. 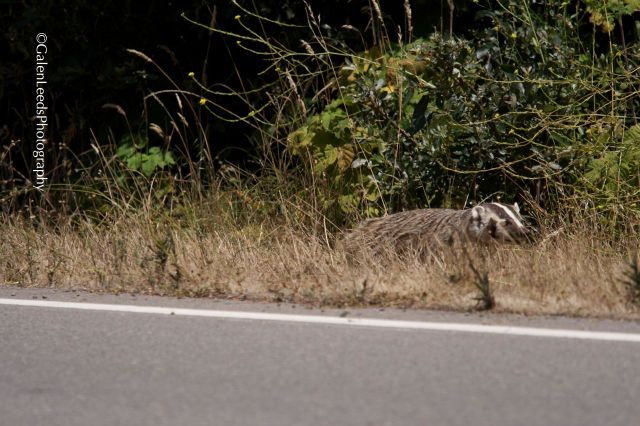 The badger, safely on the there side of the road, moments before it disappeared into the deep brush

And now for a little natural history of the badger- 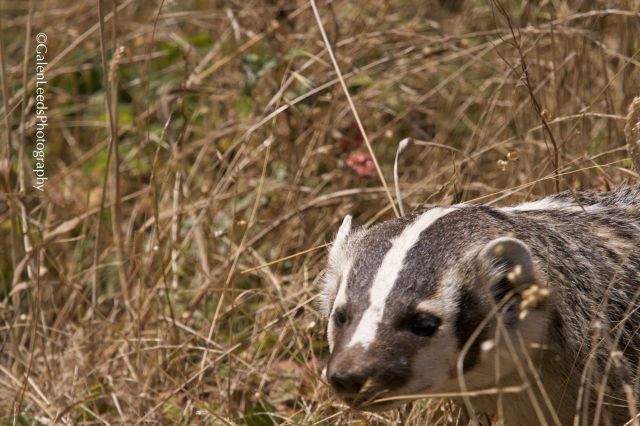 Taxidea taxus, more commonly known as the American Badger is largely predatory, although it will eat some plant types, such as corn. Known largely for its ferocity and digging ability, it is mostly found in open grasslands and praerie, from subalpine heights all the way down to the ocean. It is most common in the midwest. It belongs to the family mustelid, the same family as weasels and otters. It is a fossorial species (meaning it’s a really good digger. I mean really good, like fantastic.) There are 8 to 10 species of badger, found in North America, Europe and Asia. One of the best names is the honey badger, which likes to eat honey. 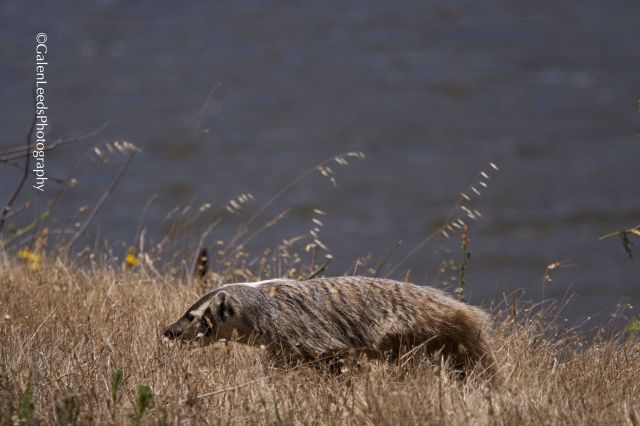 The badger has been heavily hunted for sport, and for perceived dangers to livestock. Their large and numerous burrows are a hazard to the fragile legs of are hoofed friends. There is currently an education campaign to teach people the benefits of these digging dynamos. They are important controllers of rodent and small pest populations, their main diet being mice, pocket gophers, ground squirells, and praerie dogs. They also eat amphibians, reptiles (even poisonous snakes!) and insects. They will eat bees and honey cone. Sweet! Old badger dens also serve an important function by providing cover and habitat for a wide range of species, such as the cotton tail and skunks. The digging of badgers also helps with soils aeration and building. 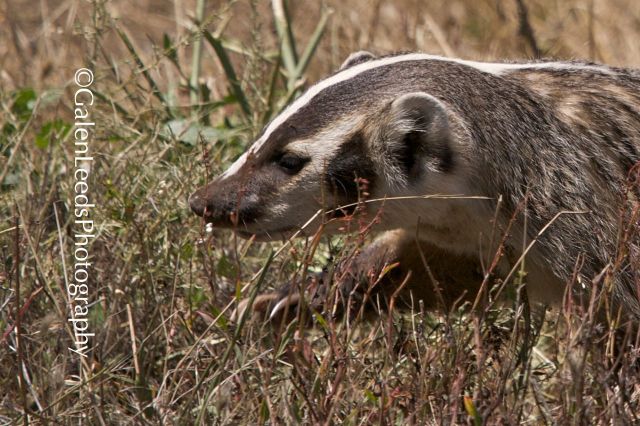 Taxidea taxus- The North American Badger. You can just make out its long digging claws

Their main method of hunting is to dig out their prey. Their long front claws (1 to 1 and a half inches long,) short powerful legs, and shovel like back paws make them fast and furious diggers, and their thick and course coats work well for shedding the loose soils. While it is normally a solitary species (doesn’t even really hang out with others of its species, unless they are getting it on,) coyotes and badgers have been seen hunting cooperatively. The coyote waits beside the badger as it digs, waiting to seize any animals dashing from the burrows to escape (coyotes are poor diggers themselves.) The badgers while unable to move quickly, are able to dig out prey that escapes from coyotes by running into holes. They do not share any prey they catch with each other, but neither do they really steal prey from each other. Coyotes and badgers have also been seen at play together. 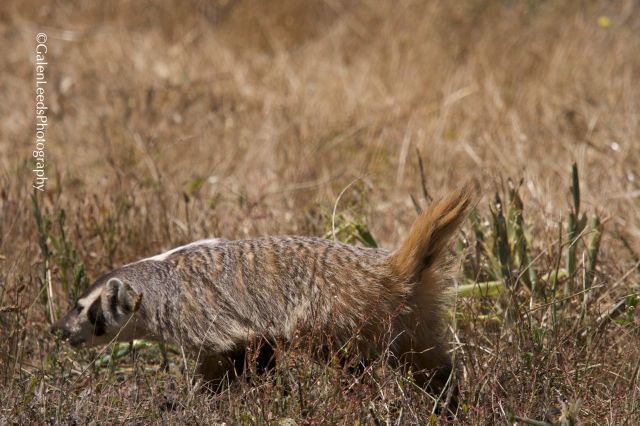 Not the best of pictures, but fun because you can see its tail

Badgers are generally 18 to 30 inches in length and can weigh up to about 25 pounds. The females are often somewhat smaller than the males. They have a short tail, usually 3-5 inches long. They have powerful scent glands towards the anal region, which they can use to mark territory and occasionally as a defense mechanism. Their most common method of defense though is to back into a den, facing out with their teeth and claws, and sometimes blocking up the entrance with dirt. Their main danger comes from them big two legged critters (humans) and the smaller furry four legged critters that they have specially bred (dogs) to hunt them down. Actually those little sausage like dogs- dachshunds (dach is the german root for badger) were specially bred to hunt badgers. Agriculture (aka habitat loss,) development (aka habitat loss,) and the fun of killing things (aka man) have led to a significant decline in the number of badgers during the last century. Occasionally badgers suffer predation from golden eagles, bobcats, cougars (mountain lions,) bears and grey wolves. 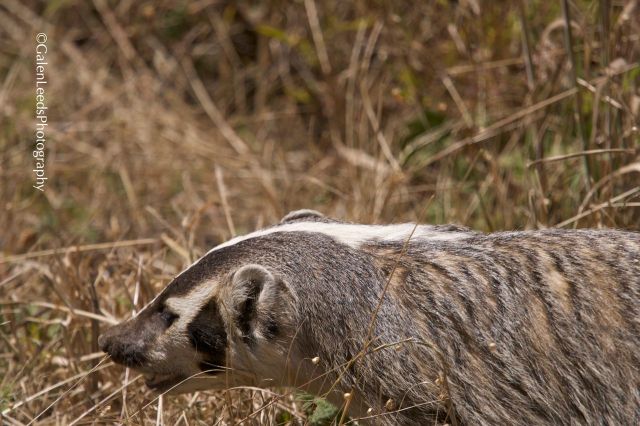 The badger steadily making its way through the grasses

They are mainly a nocturnal species, all though it is not uncommon to see them out and about during daylight. They do not hibernate, all though during the winter, in colder climates, they will go into a torpor, where their temperature drops to seven degrees celcius, and their heart rate slows. This torpor often lasts for an average of 29 hours. During the summer months they are much more active, often digging a new burrow every day or two, sometimes returning to and using old burrows. Summer is also their mating season. Crazy thing is though, while they get laid in July or August, the fetuses don’t actually start to develope until January or February. They are able to hold them in a quasi suspended animation for about 5 or six months, then they experience a six week gestation period, giving birth around April. The young head out on their own around August. The birthing den is often a grass lined den with a thirty to forty foot shaft, that can reach ten feet below the surface of the ground. It is much more complex than their summer dens.

12 Responses to The Badger crosses the road