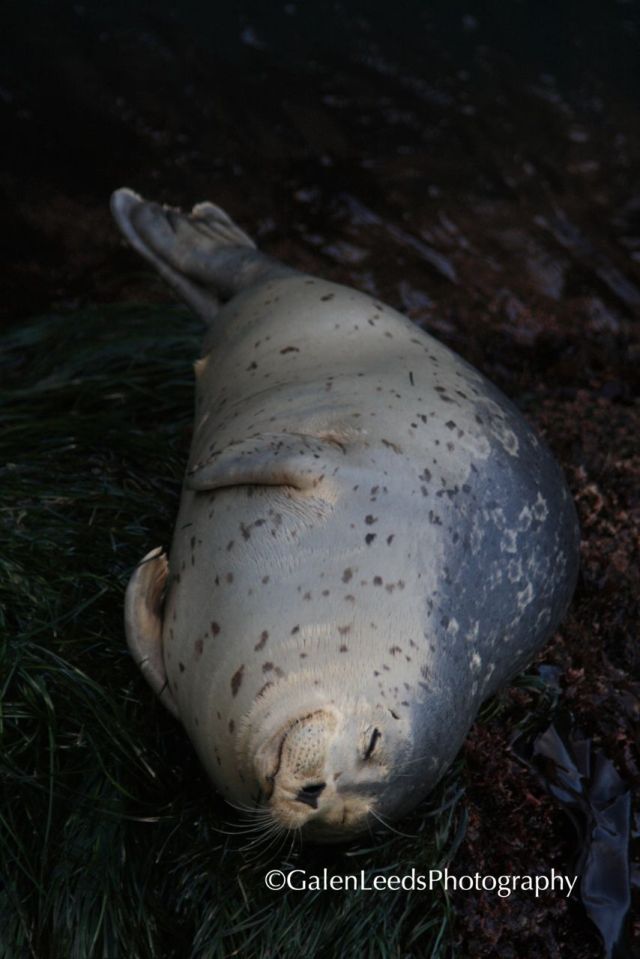 Most of my Harbor Seals portraits have been taken while kayaking, in fact I’ve written posts discussing techniques on photographing them from kayaks, but that is not the only way to capture images of them, even if it is my preferred method.

I often shy away from photographing Harbor Seals while hiking, although I will make exceptions, as I did on this day. Seals can be difficult to approach on land without spooking them back into the water (around some city piers it is not so difficult to approach Sea Lions and the like, as they are now fairly used to our presence, but Harbor Seals, especially in quieter waters are another matter). They need that time out of the water, that time to rest and relax, to warm up a little without the fear of predators. It can be key to their survival having a little down time, that they may face the world refreshed. That, and it is a federal offense to disturb marine mammals.

When I photograph them on land I wait for opportunities where I can approach them while staying undercover, hidden from view. Often if there is a group of them sleeping or relaxing on a beach, there is at least one or two seals that will scan the area from time to time for predators. Once one of them sees something, they all will bolt into the water, losing that precious land time. So I move slowly, out of site as much as possible as I search for a place where I can peak out with my camera and capture them while at rest.

This image of a sleeping Harbor Seal worked out especially well, as it was entirely in shadow. This let me capture great detail without losing anything to blocked up shadows or blown out highlights as would have happened in full sunlight. Shadows and cloudy days can be our friends when capturing images of wildlife.

I used a 300mm lens for this shot, with a 1.4x converter attached. I rested the hand holding the lens of the camera on a rock (no tripod used) to help steady the camera as I peaked out to shoot this brief image before fading away and back to my hike. I needed the extra stability of the rock, as I was shooting at 1/320 of a second and did not want to bump the ISO any higher (for noise reasons) just to get a faster shutter speed. Aperture was open wide at f/5.6

I came across this Harbor Seal while hiking in California’s Salt Point State Park. I had been photographing some of the history of the area and the interesting sandstone formations for a magazine when I came across this chance of an image that was too good to pass up.

Nature and wildlife photographer, exploring the world on his feet and from his kayak. Among other genres, he is one of the leading kayak photographers in Northern California. To learn more about him, visit him on his website- www.galenleeds.net
View all posts by Galen Leeds Photography →
This entry was posted in Anatomy of a photo, nature photography, seals, wildlife photography and tagged harbor seal, nature, photography, salt point state park, wildlife. Bookmark the permalink.

11 Responses to Anatomy of a photo #82: Let sleeping seals lie