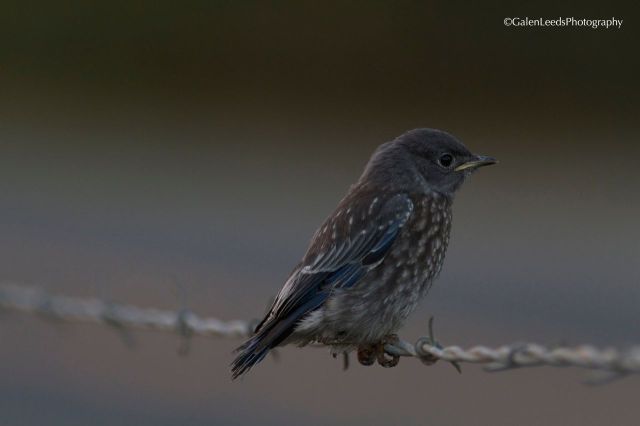 A recently fledged Western Bluebird chick. Notice the spots and the lack of blue

There are times, when many of the lessons we’ve learned be damned, we see something so exciting or new to us, that the most important thing is to get a picture, any picture at all. That’s nearly what happened to me last night. I suddenly found myself in very close proximity to a bird with a very special plumage for me.

In the photograph above is a very, very young Western Bluebird (Sialia mexicana). I saw it as I was walking to view (and photograph) some Fourth of July fireworks. Night was nearing, and the light was fast disappearing, when this juvenile bluebird that was just learning to fly fluttered along the fence where I was walking. My camera was (foolishly) buckled away in its bag, where I had to waste precious moments retrieving it.

When I pulled it out, I immediately bumped the ISO higher than I like to shoot with- all the way to 1000. Noise be darned, I didn’t have any photos of such a recently fledged bluebird (my guess is that this was its first or second day of flying, by how clumsy it was, especially in the landing department). When shooting at higher ISOs, it is often better to slightly overexposed.

I opened the aperture up wide, because I wanted to be able to use all the dwindling light I could to properly expose this picture, while shooting at a high enough shutter speed to freeze any sudden movements into clarity. I guessed at the settings, and because I was so used to using the camera at in different lighting situations, I was nearly spot on.

I used the focusing points I had preselected earlier in the day, which meant my composition wasn’t what I would have preferred, but I wanted to make sure I could get some shots off while I could. Shoot first and make sure you get a shot, refine how you shoot after. This time I didn’t gave much of a chance to refine my shots, but I am still happy with them.

I would have been hard pressed to capture these images, if I didn’t know my camera already from many, many hours of use.

2 Responses to Baby Blue Bird: Anatomy of a photo #33